Overcoming Depression with CrossFit: Part I

Why do I write about motivation? Nowadays there seems to be a million life coaches, motivational IG accounts, success experts, and self pronounced mentors out there all willing to provide you with the key to your problems. Why should you pay attention to me? One of the beautiful things about having so many voices out there for motivation is that it will resonate with the right person. We all have different drives, love languages, vocabularies, experiences, and reasons that drive us. 5+5=10 but so does 7+3. Why do I write then? Let me start with my history to show you why.

Growing up I was constantly moving, on average every 2 years. I learned at a young age to not form personal relationships with anyone because I knew I would be in another state, another city, and another school in 2 years – why bother? I also grew under the roof of two hard working middle class parents that allowed their loving concern to dominate my struggles. When I was faced with an issue I knew two things: either we would move and the problem would go away or if I waited long enough my parents would solve it out of their love for me. Now this is no special, unusual, or harsh upbringing and in fact I must stress that I had a lovingly and comfortable childhood. What also must be included was the mental environment that was passed on to me where it was stressed that I was lacking, imperfect, and that the apocalypse would happen in my lifetime. What this created in me was a mental framework of introversion, fear, scarcity, a lack of self confidence, a lack of self belief, not wanting to voice my opinion in fear that what little social value I had would diminish, belief that I could never solve my issues, belief that I was never enough, belief that I was not special, belief that I was not wanted, and a belief that I had no power in my world. 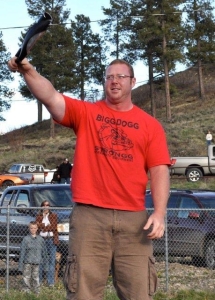 With this mental framework I created the man you see in the picture. A common nightmare during my childhood and all in my 20’s was being surrounded by large squares, triangles, and circles that towered over me. In my dream I felt so small that I would freeze up, start hyperventilating, and scream. The natural solution was to become so large, so strong, so emotionally shut down that nothing could move, harm, or shake me. I was to create such strong armor around my mind, heart, and physical body that I would have power over my world. Did this work? Yes it did. At 6’6” and 320 pounds I could flip cars, bend frying pans, walk with 1100 pounds on my back, pick up 450 pound farmers handles in each hand, and move 400 pound husafell stones 300’+ in a single shot. I became the Strongest Amatuer in the Nation for Strongman several times. I earned the respect of others as well as their admiration from the physical feats I could perform. No one wanted to make me mad and no one wanted to fight me. My plan had worked but it came at a cost.

I had few deep relationships where I was truly myself and not my persona “El Chupacabra”. I had very little freedom in the form of financial success – my bank account was commonly $0. I had an extremely negative mind, I was constantly in physical pain in my joints, my heart would race at 80-90 beats per minute while watching tv, I sustained 6 back injuries, my right knee cap shifted out of place preventing me from bending my right leg, I had bursitis in my shoulders, I suffered from clinical depression, and I was diagnosed with GI ailments. The biggest price was the lack of self worth/value/confidence that I tried to pay, in fact I tried to pay it 4 times, with failed suicides.

How did I make it out of that mental framework and come to be the person that is typing out a blog post about motivation? I will cover that next.

Click here to read Part II of this series.

About the Author: Jacob Miskimens

Growing up I was not athletic until I discovered the weight room in High School. That was the start of the journey that first took me into Powerlifting with Mike Magruder. Under his tutelage I set deadlift world records in the newly created 259lbs class of the WABDL federation.

I was then fortunate to meet and train with the 2005 2nd Strongest Man in the World, Jesse Marunde, for 3 years. With his knowledge and techniques I found myself reaching the rank of number 1 Amateur in the US 3 years out of the next 7.

Something was missing though as I struggled with injuries, proper movement, and nutrition. I spent time at MBS CrossFit and Pat Burke early in 2013 watching him and his crew do some brutal workouts. It was their environment and openness to let me train that convinced me to switch sports from Strongman to CrossFit.

Since June 2013 I been getting an education in business, coaching, marketing, sales, management, book keeping, motivating, listening, and helping others thanks to the creation and operation of CrossFit Pagosa.”