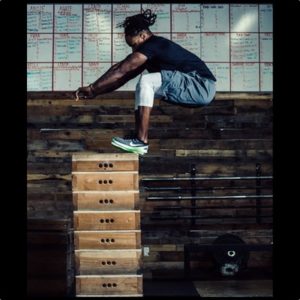 Former track star and NFL Wide Receiver, James Townsend is the .1% of the .1% when it comes to speed, strength and explosive power. Born in Bronx, NY but raised in South Jersey, he has been an athlete since the age of 4.

He was not your normal child growing up and his talent quickly surpassed the kids of his own age. His two older brothers would have him race their friends at the age of 4 for easy money—it was almost unfair!

After realizing how fast and talented he was, his brothers encouraged their mother to put him into football at the age of 5, where he played and dominated kids much older.

He went on to become an All American High School Wide Receiver and 100M Track star at Holy Cross High School in South Jersey.

After that, he took his talents to the University of Iowa and played as a true Freshman. After his collegiate career, the Chicago Bears picked him up as a free agent. James’ current passion is with CrossFit and is a rising star who can combine insane speed with power that will help him achieve big things.