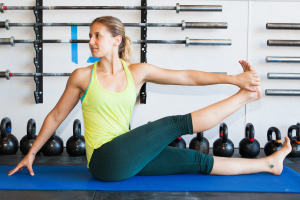 Stephanie is an athlete who loves yoga and understands the benefits of it as part of athletic training. Movement has always been an important part of her life, starting with ballet at age 3 and moving to competitive cheerleading at age 16. She started practicing yoga in college but it was years later when she started training for triathlons that  her yoga practice was taken to the next level. Stephanie utilized yoga as cross-training and as a way to increase her overall performance, prevent injuries and improve recovery time. She completed more than a dozen races including two marathons, a century ride and two Half Ironmans.

Eventually, her love of endurance sports began to wane. It was then that her interest in gymnastics and CrossFit started to grow. When she was introduced to CrossFit in 2013, it wasn’t long before her training days out numbered the days on the yoga mat. It was around this time when she created WOD Recovery Yoga. A yoga practice designed to help athletes recover mentally and physically from training. Shortly after that, she wrote the WOD Recover Yoga E-Book (http://www.endureyoga.com/shop/a-functional-fitness-athletes-guide/) as a resource for athletes looking to incorporate yoga into their daily training.

Beyond coaching, she is a student at heart. She loves learning new forms of movement to improve her performance and the performance of her athletes. She challenges herself daily to move past physical and mental barriers.

Skill: A: Hand balance practice - any variation  Coaches notes: Work on finding balance on your hands with or without the wall, on one hand, tripod, headstand, inverted hold, pike position with feet elevated on [...]